The Man From Earth 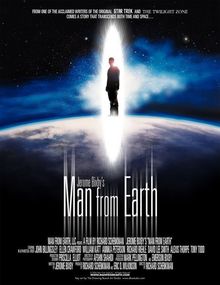 According to lore, Jerome Bixby spent four decades writing the screenplay for The Man From Earth, starting some time during the 1960's and completing it on his deathbed in April 1998 by dictating the last of it to his son, Emerson. Bixby was the author of numerous short stories and screenplays including the notable The Twilight Zone episode "It's a Good Life" (1953), a 2004 finalist for the 1954 Retro-Hugo Award for Best Short Story. He is most widely known for penning four episodes of the original Star Trek series.

The Man From Earth is a 2007 science fiction film that tells the story a college professor, John Oldman, who claims to be a Cro-Magnon who has lived for over 14,000 years. The entire film transpires in a single setting where John reveals his identity to colleagues who are skeptical of his claims and try to prove his statement a prank or him insane. John's colleagues are comprised of Harry the biologist, Edith the art history professor and devout Christian, Dan the anthropologist, Sandy the historian, Art the archaeologist, Will the psychiatry professor, and Linda the young student.

The film, written and directed like a stage play, offers no special effects or even much in the way of film technique that rises above competent. And while the cast is fine I can't help imagining that swapping out an actor here or there for another of equal caliber would make much difference. That said, based solely on the writing, the film succeeds far beyond its modest $200,000 budget. Driven by engaging dialogue and clever storytelling the film explores complex ideas and challenges the audience to think about the nature of time and the human experience.